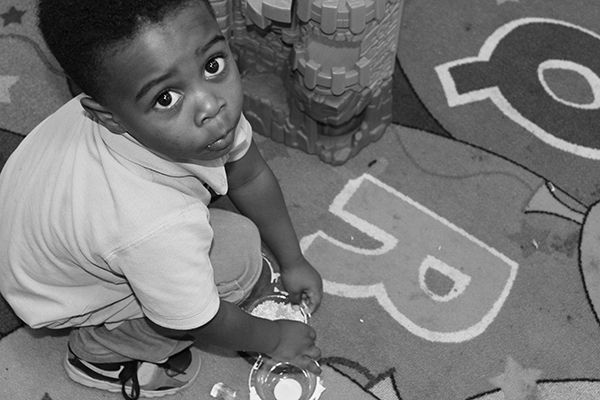 The heaviness in our world right now is pressing on our minds and hearts as protests standing up for Black lives grow in all 50 states and around the world. The weight we feel comes from the trifecta of a global pandemic that's disproportionately killing African Americans, a renewed urgency on the relentless assault on Black lives, and a president who is not protecting our citizens. Suddenly, it’s as if we're in a vortex. And I can't help but imagine our Playtime children seeing these violent images on T.V. while confined to a single room in a shelter.

In our 17 years, Playtime has served mostly African American children—about 87% of D.C. residents experiencing homelessness are Black. We have worked hard to impress upon our city that in tackling homelessness, children’s lives matter. The families we serve matter. And, though it shouldn’t need to be said again: Black lives matter. We owe it to the children and families we serve to stand up and show up to the civil rights struggle of our time, so the promise of freedom, justice, and equality in our nation can truly be realized.

Black children are growing up in a world where the Ivy League credentials of a bird watcher who sits on the board of the Audubon Society in Central Park must prove his worth as a Black man to a white woman willing to call the police on him. And we know the tragic consequences of too many police encounters with Black men—George Floyd is one of countless examples.

Like Minnesota, D.C. prides itself on being a progressive city of educated professionals. Under the veneer hides ugly statistics and devastating inequality that hurt children of color every day. For example, according to the FBI, 40 percent of victims of sex trafficking are African-Americans and in D.C. alone, more than 2,000 children and youth go missing each year, including 16 teenagers currently missing, several as young as 13.

When one of our Playtime participants went missing some years ago, she was described as a reckless runaway and treated as if her 14-year-old life didn’t matter. The police did not look for her or return our or her mother’s calls for help. We later found her on the other side of the country, a victim of child sex trafficking. Playtime volunteers donated the money to buy her plane ticket home. A happy-go-lucky 18-year-old graduate of our preteen program at D.C. General (who for weeks before he turned 13 banged on the door every week asking to join the program) became the District’s 7th homicide victim in January—another Black male who lost his life to gun violence, his life quickly forgotten. And baby Makenzie Anderson, an 11-month-old living at the Quality Inn shelter hotel, was beaten to death in February. Her story quickly faded from the headlines with no arrests. How has our city demonstrated that any of these three lives matter?

Playtime sees families struggling every day just to take care of their children and find the peace and stability that many of us take for granted. Every day in the playroom, we saw children who needed help, but the shelter system all too often ignored their cries.

Through our efforts—our testimony to city council, media advocacy, and meetings with city officials—we work to elevate the worth of black lives, confronting the city with evidence that it doesn’t see our children. We urge city officials to invest more in helping children end the cycle of homelessness. As direct service providers, we know that silence is complicity. We must never stop speaking up and speaking out.

In times like these, I find comfort in the wisdom of our elders, and inspiration in our children, whose lives are so worth fighting for. Here are the words of Martin Luther King, Jr., whose speech at Stanford University in 1967 is as relevant today as it was then.

“I think America must see that riots do not develop out of thin air. Certain conditions continue to exist in our society which must be condemned as vigorously as we condemn riots. But in the final analysis, a riot is the language of the unheard. And what is it that America has failed to hear? It has failed to hear that the plight of the Negro poor has worsened over the last few years. It has failed to hear that the promises of freedom and justice have not been met. And it has failed to hear that large segments of white society are more concerned about tranquility and the status quo than about justice, equality, and humanity. And so in a real sense our nation’s summers of riots are caused by our nation’s winters of delay. And as long as America postpones justice, we stand in the position of having these recurrences of violence and riots over and over again. Social justice and progress are the absolute guarantors of riot prevention.”

Playtime will continue standing up for black lives, for children’s lives, for families’ lives, and we appreciate our volunteers, supporters, and partners for standing with us.