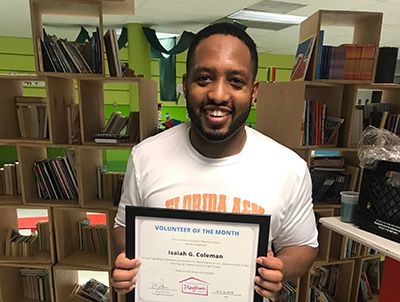 Isaiah G. Coleman has been a Play Ranger since February 2017, and says, “it has been one of my best experiences since moving to D.C. in the summer of 2016.” He moved here from Florida, and we’re glad he did.

“Isaiah has been such a great addition to the Teen Night team,” said Michelai Lowe, Site Manager at D.C. General. “He shows up ready to play and mentor the teens. He’s proactive when it comes to program; he always jumps right in to show the teens our activities can be ‘cool’ if they just try them. Most recently he organized a tour for our teens to the Howard School of Medicine where they learned about cadavers and the process of getting into medical school!”

Why did you initially get involved in Playtime?

I have always been passionate about working with youth, so when I first came to D.C. that was one of the first things I wanted to get involved in. I first began looking for a Boys and Girls Club to volunteer with because I grew up in the Boys and Girls Club; that’s where I spent most of my time volunteering back home in Florida. However, one day I was reading an article online from The Washington Post by columnist Petula Dvorak about students in the D.C. area without clean uniforms to wear to school. I emailed her asking how can I help in providing uniforms. She not only was kind enough to reply, but also recommended that I volunteer with Playtime, and said they were really making effective change with the youth. It was perfect for me because in my Master’s program at the University of South Florida, my teaching assistant and I were doing our own independent work in the Tampa area with homelessness. So when I came to D.C., that’s something I had continued to do on my own, but now Playtime gave me a chance to join an organization that was already making an impact in this area, combining my work with youth and having a direct impact on homelessness.

How has volunteering with Playtime affected you?

To say that the teens only get something out of it would be a lie because these kids continually motivate me to do better. I legit enjoy being there. Sometimes I’m tired and don’t want to go, but when I get there all that changes. I’m a kid at heart so I love playing with them. But they keep me motivated and continually make me extremely grateful for what God has blessed me with. In all honesty, the props go to Michelai for letting us actively plan events with them, such as allowing me to show them the cadaver lab at Howard Medical School, doing the haunted house, and allowing us to do brunch for the teens. None of it would be possible without her, so I appreciate her for allowing us to be creative with them and ultimately allowing this experience to have a great impact on my life.

My favorite was the Halloween haunted house we put on at D.C. General last fall. It was such a good feeling to not only see the excitement on the kids faces but all of the parents that walked through the haunted house had a good time. It meant a lot to me because we were originally trying to go to a haunted house at Howard Medical school but they didn’t have enough room for us. So I brought it to Michelai’s attention for us to be bold and do one on our own and give the kids something of their own to be proud of. And Michelai being the supporting person she is ran with it, then all of a sudden everyone started throwing in ideas and it all came together with their first Haunted House at D.C. General.

What else do you want people to know about your work with Playtime?

There is nothing special about what I do at Playtime. All you have to do is just have a heart to serve and a love to see the kids grow and achieve all they want to accomplish. Honestly, there are plenty of other Playtime volunteers, in my opinion, who do great work with the youth; they’re not only hands on but take it to another level and advocate on their behalf in the community.

Learn how you can be a Play Ranger, too!